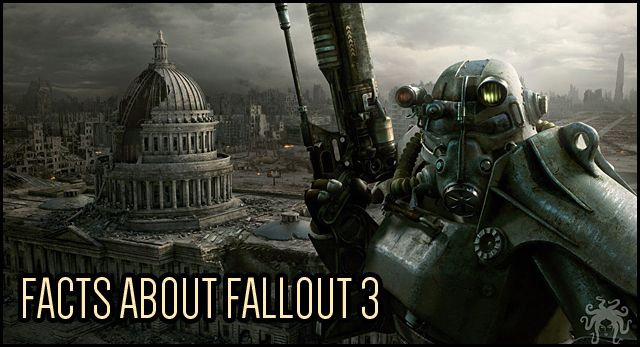 - No matter how ugly you are, your father says you look just like him.
- In the Fallout univese, heads get easily detached.
- The Capital Wasteland has robots with English accents. Bloody hell...
- Yao Guai are mutated black bears with a really bad temper.
- Super Mutants are gender neutral. But you knew that. (Fallout 3 Facts)

- You can hold a flamethrower, minigun, missile launcher, a dozen small guns, 100 cans of food and still sneak up on someone. Cool!

- Deputy Weld is cooler than you will ever be.
- Moira is the most useful shopkeeper in Fallout 3.

- People of the Capital Wasteland can survive several shots to the head with a sniper rifle.

- You blast a kid with a "Fat Man" and he runs away... ALIVE.
- You can drink the water from toilets to heal gunshot wounds.
- Behemoths found the secret stash of giant fire hydrants.
- The robot called "PROTECTron" doesn't even protect you!
- I can search the bodies of my fellow men, but not aliens...

- You can steal something by picking it up, putting it down in a hidden area, and then taking it.

- The atomic bomb in Megaton is the same model used by U.S.A. to bomb Hiroshima in 1945.

- You will gain radiation if you eat a radroach, yet you gain nothing from carrying around irradiated meat with you for days. (Fallout 3 Facts)

- A bullet from a 10mm pistol can magically blow someone's head into little pieces.

- I can carry around 10 missile launchers... in my pockets... since I don't have a backpack.

- I can have 2 crippled legs, and somehow manage to still carry around 300 pounds worth of weapons, clothes and junk.

- People who lived in Vaults were more screwed than the wastelanders. Nothing beats being a human guinea pig.

- People in the wastes would rather not be with you, despite the fact that you are the only other human being around for tens of miles.

- Food from 200 years ago is still edible and you never get sick after eating it. 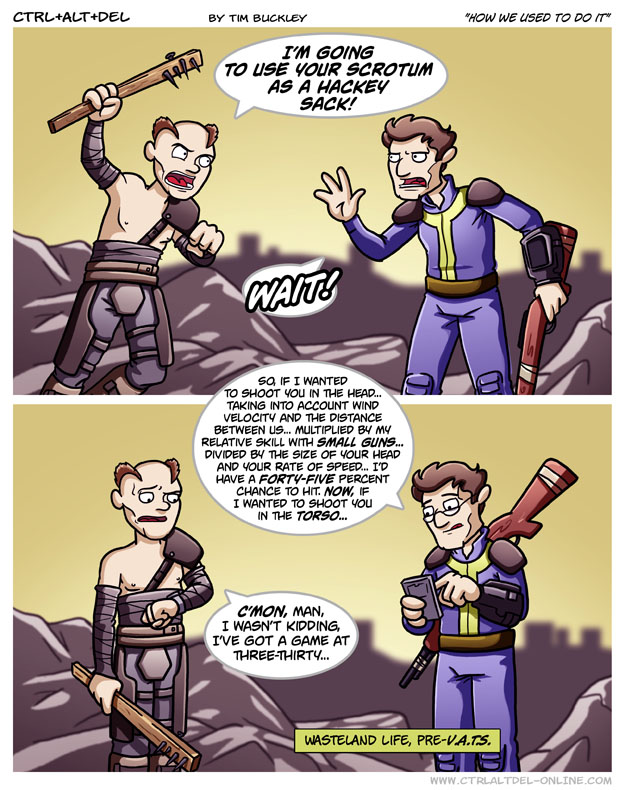 - Time seems to magically freeze just by looking at your Pip-Boy.

- When talking to someone, the whole world waits for your conversation to end. Bullets stop in mid-air, people have their arms reached out and standing on one feet, deathclaws open their mouths right behind the person you're talking to.

- A follower will wait for you in the same place forever. That's what I call loyalty.

- Feral ghouls can easily be fooled by wearing a 'Ghoul Mask,' despite your character wearing armor, carrying weapons, and having a smooth skin.

- Moira Brown will never hate you, no matter how hard you try. (Fallout 3 Facts)

- Even though pre-war money is still in abundance, the inhabitants of the wasteland chose to change currency to bottle caps, which can be easily counterfeited.

- Fawkes makes the game rather easy, always stealing your kills.

- You can carry an unlimited supply of ammo, including small nuclear warheads the size of footballs, and it will never slow you down.

- In the Capital Wasteland, ammunition is just laying around everywhere in boxes.

- 5,000 rounds of 5mm ammo will weigh exactly the same as a single throwing dart: nothing.

- Cats are mysteriously missing from the Capital Wasteland. Horses too.
- There are also no mutated spiders in the wastes. (Facts about Fallout 3)

- For some reason, you cannot drop or discharge any quest item, even if the quest was completed. And that's just annoying.

- A town full of kids that's been running for a good 200 years, Little Lamplight is still a thriving community without anyone to repopulate the town.

- With the exception of Nova, whom you have to pay, no one wants to do their part in repopulating the world with you. (Facts about Fallout 3)

- I can go on a killing spree in broad daylight, murdering most people in town... But if I wait three days and come back, all is forgiven. Thank Atom!

- Deathclaws do not like you, no matter how much radroach meat you throw at them.

- There is a magical wall that stops me from leaving Washington D.C.. Sucks!

- Did you notice? No matter how many shots the Brotherhood of Steel initiates shoot they will never hit the targets in the Citadel's courtyard.

- People complain about irradiated water, but when I throw away 100 bottles of purified water no one does sh!t! (Facts about Fallout 3)

- No matter how hard you try, ghouls can always outrun you... even though their legs are practically made of jell-o.

- You can disarm an atomic bomb with only 25 Explosives skill. What?!

- They say there is no clean water anywhere in the wastes. But apparently there is fresh water in Tenpenny Tower toilets.

- Eating radroach or ant meat will never make you throw up, even though you lived off of processed food for 19 years inside your Vault. (Facts about Fallout 3)

- You can easily swim in the Potomac River despite the fact that you lived your entire life in a Vault.

- If you shoot someone in the foot and have the 'Bloody Mess' perk, their other limbs will most likely come off. (Fallout 3 Facts)


Did you enjoy 101 Facts about Fallout 3? Have some Fallout 3 facts of your own to add to this list? Leave a comment to our page and we might just add them to this list. More Fallout Facts?