Boston has been mentioned previously in Fallout 3, Fallout: New Vegas, and Mr. House's obituary, with respect to The Institute -- a secretive organization (formerly known as MIT, the Massachusetts Institute of Technology) within The Commonwealth. Boston is a city steeped in United States history. Boston is the place where "it" goes down. Always has been. Always will be... I'm proud to call myself an American because of Boston. So, I can't help but ask: Will we get to see a Fallout 4 in Boston? Hmmm... 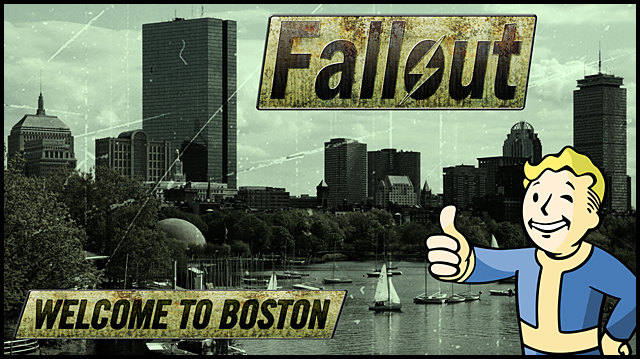 Boston started it all with their "Tea Party" (among other important colonial events). Boston has continued strong despite recent attacks. Some would argue this is a reason Fallout 4 should not take place in Boston, but I argue Boston is worthy of this and deserves it as long as Bethesda's game development and presentation is honest, respectful, and full of hope. Boston strong for the Marathon! Boston will always be a symbol for American freedom.

In Fallout 4, Boston might be involved in a struggle for freedom and justice yet again. In Fallout, we are most familiar with the story of The Replicated Man, in which it is possible to destroy an android's identity an gain possession of his unique A3-21 Plasma Rifle. This quest is a nod to Philip K. Dick's short novel "Do Androids Dream of Electric Sheep," which was later remade into a film entitled "Blade Runner." This was the story of a group of synthetic people (androids) and their struggle to escape the bonds of servitude on their journey to achieve person-hood in the eyes of the state. In many ways, this struggle mirrors, and is an homage to, the African American experience in the United States.

Bethesda has been rumored to be scouting Boston as a setting for the upcoming Fallout 4, and the rumors are true! This author has recently found certain peer-reviewed academic articles related to leaked Bethesda comments and legal information pertaining this certainty. Some of the scouting activities even mentioned using civilian drones to survey the area for world map generation! However, the FAA (Federal Aviation Administration) is stalling these operations for some reason. One thing is for sure, if Fallout 4 in Boston would really happen, it's going to be unlike anything we've seen in the previous Fallout games, with buildings more on par with cyberpunk and retro-futurism.


What about you? Would you like to see a Fallout 4 in Boston or not really?