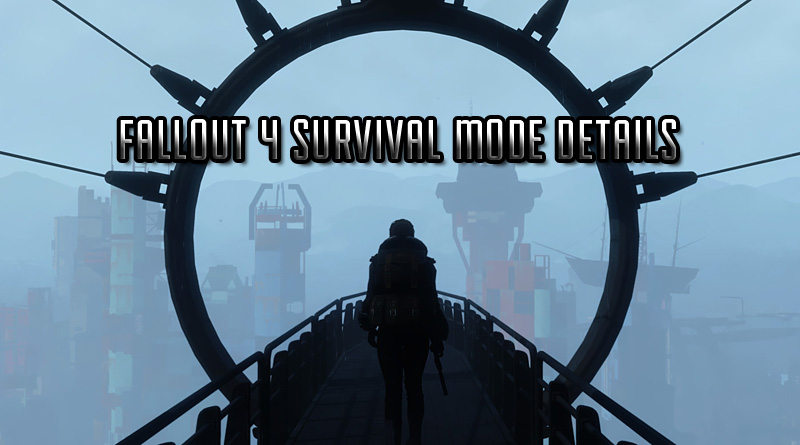 I frantically weave myself in and out of cover behind one of those two-hundred year old industrial diggers as bullets and explosives fly towards me. I cling onto my sanity by a few in game millimeters - them being the small distance between my character and the ever imposing barrage of absolute and utter annihilation. I die... Rage ensues. The only distinguishable features between myself and a feral ghoul were that of physical appearance, because Survival Mode, needless to say if you've been paying attention, had been driving me pretty feral. Had been.

I realized pretty quickly from there on out that I needed to be much more cautious than I'd ever been before in a Fallout game. Survival is no walk in the park. Enemies kill you faster than Preston Garvey can tell you another settlement needs your help. You'll need to sleep, both to avoid the crippling effects of sleep deprivation and to save your oh-so-precious game progress. And of course, you also need to eat and drink, so brace yourself for a tonne of deep, philosophical, origins-of-the-universe-type conversations with Takahashi as you enjoy your power noodles. Nan-ni shimasho-ka?

Oh. And no more fast travel. From here on out, you're walking.

This may seem to some like an unwanted and annoying burden upon both progress and enjoyment, and to others the pure embodiment of everything they've ever hoped for in a Fallout game. Both sides will have their reasons for the choice they make on whether or not to dive head first into a far deadlier Commonwealth. Here are some of the reasons I believe that in doing so, you will significantly enrich your Fallout 4 experience.

Definitely the biggest change to come out of Fallout 4 Survival Mode is the removal of fast travel - what was one of the most useful and time saving features in Fallout is now gone, much like the hours of your life you'll be throwing to the rubble on the long walk from Diamond City to Sanctuary. Although this made making my way around far more tedious and mundane than usual in the earlier stages of the game, I've come to learn how to roll with the punches thrown at me, and ultimately my experience has only grown more enjoyable.

You will most likely find it harder to get around in your early levels due to the increased enemy encounters and demand on supplies between points X and Y. Once, however, you've gotten used to the idea and can accurately predict whether or not it's worth taking a risk for a few extra stims and bullets, things will start looking up. No longer will entire hours of progress be vanquished in an instant.

No longer will you be bored, constrained to the same roads between Sanctuary and Diamond City that you've already seen ten times over, as your experience and newfound skill will allow you to explore more and savor what the Commonwealth has to offer. No longer will you moan and bicker about Fallout 4 "not having enough content" because you were lazy and fast traveled past it all. If you're one of those people. Finally, you can appreciate the wonders of the Commonwealth how you were supposed to; on your own two feet with a dentist appointment you're gonna miss unless you find a bed. Speaking of beds...

YOU NEED TO SLEEP TO SAVE AND SURVIVE

That's right! Now, in order to save your progress, you need to actually sleep in a bed first. This way, you can't just cheat a battle by saving every five seconds. It will force you to choose your skirmishes carefully and take them seriously. Often, I used to run into the sound of gun fire screaming "Freedom!" in my best Mel Gibson voice. Now, I stay the hell away, and I keep my goddamn mouth shut, unless I know I can take them, or they have something I really need. The removal of saving is what keeps the tension in Fallout 4, something it arguably somewhat lacked before, prominent at all times. Even in a full suit of power armor, I can still get my ass handed to me if I'm not careful - just a few hours ago, I lost an hour of progress to the first Courser you meet, having died with my last save being at Diamond City.

Furthermore, the effects of sleep deprivation are not something you can simply ignore. They have massive implications for your intelligence, your endurance, and so on. You'll also build up more fatigue - which is essentially like the radiation penalty for the health bar, but for action points instead. Fatigue can build up through becoming ill (more on this later), not sleeping, eating, drinking, and more. Like radiation, a small amount isn't too much of a problem, but you do not want to let it get out of hand. Trust me. Action points are extremely important in Survival - for sprinting out of danger, for using VATS, etc.

Finally, in order to get a full night's sleep and avoid the ever imposing threat of sleep deprivation, you'll need a proper bed. Dirty beds found in the wilderness can grant at the most only five hours, which isn't enough, and even worse than that are sleeping bags, which will grant three. You need eight at least.

In short: the need to sleep for survival and saving progress keeps tensions running high, and this can either be a reward or a restraint for the seasoned Fallout player. Only you can decide which applies to you. You'll probably need to leave your game running if you're not close to a bed and you need to go, else you'll lose all your progress. And annoyingly, the game has crashed once in Survival, with me halfway up Trinity Tower and the nearest save at Diamond City. Still worth it though.

EATING AND DRINKING IS NOW A NECESSITY

Your days of living as some weird superhuman that doesn't conform to the general laws of nature are at an end, because you actually have to, you know, eat and drink to stay alive now. If you don't do so, you'll suffer the harsh consequences; penalties upon your SPECIAL statistics, on your action points, and more.

It's essentially the same as in Fallout: New Vegas - although with the new diseases you can get, you'll want to be more careful about what you eat and drink. So don't eat raw mole rat meat. Obviously.

This made for a few tense moments earlier on, when I had less access to food and water, but after you level up, as with anything, it all starts to become a little easier. One implication of actually having to eat and is the fact that now, you'll actually build up rads faster than before, especially if you end up having to drink from a lake, or the ocean. The Lead Belly perk becomes a handy advantage in Survival mode.

YOU CAN NOW SUFFER FROM DISEASES

Another new addition in Survival mode is diseases. These can have debilitating effects on any attributes of your character, such as SPECIAL stats, health, action points - you get the point. You can catch diseases from animals, consumables such as dirty water and uncooked meat, or by generally living unhealthy, by, for example, not sleeping. Maybe this will help inspire you to not stay up until 4 in the morning playing Fallout 4... No? Okay.

Curing diseases requires a doctor or antibiotics, with the latter affecting your hydration, like stimpaks - of which you'll be using far less of if you don't want to become a starving, sleep deprived, dehydrated zombie. Antibiotics are fairly uncommon - you'll want to keep an eye out for them. My first disease was caught just before The Mechanist's Lair, and with no antibiotics, every medkit was suddenly far more important than ever before.

So, what do you think about Fallout 4 Survival Mode? Nice, eh? There are a few other tweaks (carry weight, damage, defense, and so on) designed to make the game all the more gripping should you choose to turn on Survival mode. And you should.

by Gary of Fallout Forever