Fallout 4 Announced? What Would You Do?

Here's a question for you: What would you do if Fallout 4 is announced? Probably cry tears of joy, pre-order it and patiently wait until it's released? That's the "logical" expectation anyway. We asked the fans of Fallout Pages on Facebook what would they do? Here's what they said... 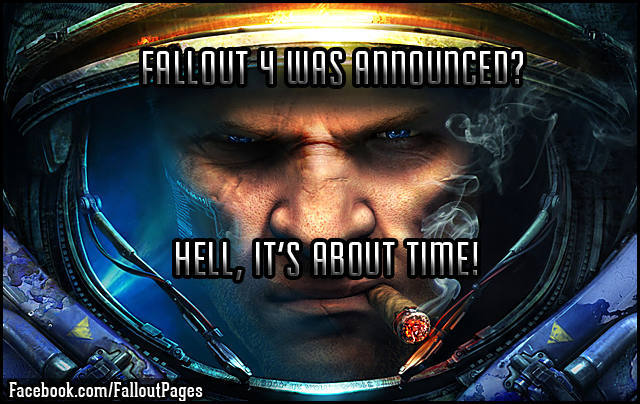 Fallout 4 Announced? What Do?

Fallout 4 announced? What can you do? We asked, you answered! Here are some of the craziest things people said they'll do if Fallout 4 is announced.

"I would scream louder then a little girl meeting Justin Bieber." (William White)
"Complain about there not being a Fallout 5." (Jack Watkins)

"I would dress as the Brotherhood with my dad and do the Harlem Shake." (Josh Kirito Smith)

"I would run around town naked, but painted blue and yellow in the Vault pattern, shouting "Prepare for an uncertain future!". When I eventually get caught by the police and get locked up for the night for drunken disorderly conduct, I will take out my iPod hidden in between my butt cheeks, and play 'Maybe' by the Ink Spots through the office desk speaker in the police station lobby. While they try and subdue me, I will be placed in the cell, kicking and screaming "War, war never changes..." (Dyl Bauman)

"Confirm it's real then lose my mind." (Mike Boren)

"Preorder it, of course. Also buy a spot in a vault as it would signal the end is near." (Michael Wilson)

"I would sit in my chair, nothing else, just sit... and stare... and wait. I wouldn't blink or breathe, nor eat and drink, I would just, simply, sit. And after waiting so intently for said intended release I will simply explode into torrential forces of matter and become one with Fallout 4 itself, falling out of the 4th dimension and directly into... myself. I am Fallout 4, Fallout 4 is life." (Conan Lazzaroni)

"Carve FALLOUT 4 HYPE into my chest with a spoon, cauterize the wound, take a selfie, and send it to this page." (Zachary Young)

"Wait to see how true the rumors have been. Particularly Boston setting and lack of Brotherhood and super mutants." (Jim Baird)

"Realistically? I would rip off my clothes and scream at the top of my lungs whilst running around my home." (Sebastian Louis McIntosh)

"Go out side and yell at the top of my lungs FUCK YES! IT'S BEEN ANNOUNCED." (Chris Roth)

"I would travel to Skyrim and nuke their whole world so they can't slow down Fallout 4 development anymore." (Daniel Hayes)

"Bath in the blood of Megaton." (Logan J. Stevens)

"Get a tattoo on my forehead that says S.P.E.C.I.A.L." (Ramon van Ostaijen)

"What if Half-Life 3 and Fallout 4 were announced at E3 this year? The Internet would shatter." (Jonah Mosher)


What about you? What would you do if Fallout 4 is announced? Feel free to message us on Facebook. See you around the Wasteland!