You might want to start a new game for this one, as some challenges are pretty... wide. For example, you'll have to run from Vault 101 to Rivet City without wearing armor and without using any weapons. Or save Sheriff Sims from Mr. Burke by taking the bullet yourself. Here's 40 Things To Do in Fallout 3. 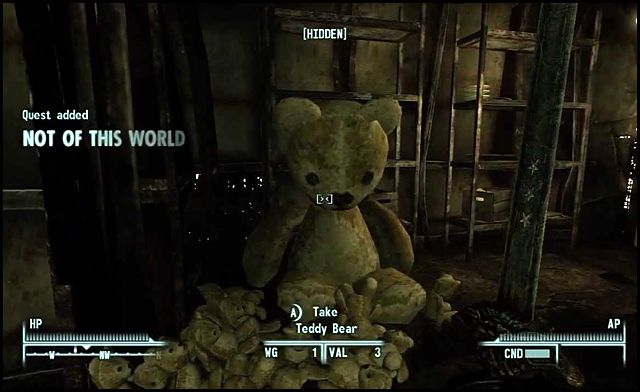 Things To Do in Fallout 3: Collect all Bobbleheads

1. Collect ALL S.P.E.C.I.A.L. Bobbleheads:
- Agility at Greener Pastures Disposal, in the office, on the desk.
- Charisma at Vault 108 in the Cloning Lab, on a table.
- Endurance at Deathclaw Sanctuary: Inside, next to a brahmin corpse.
- Intelligence at Rivet City, in the Science Lab, next to the lockers.
- Luck at Arlington Cemetery North in the Arlington House on a hill.
- Perception at Republic of Dave: In the Museum of Dave, on a bookshelf.
- Strength at Megaton: Lucas Simms' house, on the desk in the bedroom.

2. Collect ALL Skills Bobbleheads:
- Barter at Evergreen Mills: Bazaar, in the room to the right of Smiling Jack.
- Big Guns at Fort Constantine: CO Quarters, in the basement, in a safe.
- Energy Weapons at Raven Rock, inside Colonel Autumn's bedroom.
- Explosives at WKML Broadcast Station: Sealed Cistern, manhole behind station.
- Lockpick at Bethesda Ruins: Bethesda Offices East, second floor.
- Medicine at Vault 101: Dad's medical desk.
- Melee Weapons at Dunwich Building, inside Virulant Underchambers, near the exit.
- Repair at Arefu, inside Evan King's House (requires 50 Lockpick).
- Science at Vault 106, inside the Living Quarters, past the atrium.
- Small Guns at National Guard Depot, in the Armory (opened from the third floor).
- Sneak at Yao Guai Tunnels, inside yao guai den.
- Speech at Paradise Falls: Eulogy's Pad, on the table.
- Unarmed at Rockopolis: west of Smith Casey's Garage and north of Girdershade.

Other Fun Things To Do in Fallout 3

4. Kill a Super Mutant Behemoth with just one shot using the Experimental MIRV.
5. kill all Slavers in Paradise Falls and save the slaves.

7. Blow up Megaton. Just make sure to save before. Or not... :P
8. After blowing up Megaton, go talk to Moira Brown the ghoul.
9. Fight a deathclaw with your bare hands.
10. Punch Vault 112's little girl (Doctor Braun) in the face.

11. [CHALLENGE] Play the entire game without using a single Stimpak.

12. Shoot a radroach with a Fat Boy.
13. Shoot a boatfly with a Fat Boy.
14. Kill Tenpenny and throw his body off the tower. His guards don't even care.
15. Fire the MIRV into Citadel's courtyard.
16. Another one of the fun things to do in Fallout 3 is to become a Slaver.

17. [CHALLENGE] Leaving Vault 101, run all the way to Rivet City wearing no armor and not engaging any enemies you encounter.

18. Burn Bob from Oasis with a flamer after applying the ointment to his heart.
19. Put a mine/grenade into to someone's pocket while pick pocketing.
20. Put a mine/grenade into every wandering trader in the wastes.
21. Save Sheriff Sims from Mr. Burke by taking the bullet yourself.
22. Shoot the "You Gotta Shoot 'Em in the Head" quest giver... in the head.
23. Find the Firelance (an unique alien blaster - things to do in Fallout 3).
24. Send Dogmeat to search for supplies and then teleport to the other side of the map.
25. Use a Shishkebab to kill a deathclaw. Easy, right?
26. Dismember a Behemoth's foot and take a screenshot while standing next to it.

27. [CHALLENGE] Play the entire game without buying anything.

28. Use the Railway Rifle to write your name on all the billboards in the game.
29. Shoot a MIRV at your feet and fly so high that you can see where the map ends.
30. Enter Vault 87 through the front door. Make sure you have tons of Rad-Away's!
31. Save Red (Big Town) from enslavement, only to take her reward, and enslave her again.

32. [CHALLENGE] Only use one weapon throughout the entire game.
33. Watch a deathclaw fly... not guaranteed to happen, but fingers crossed.
34. Make a house out of corpses, literally. Four walls, no roof, and live in it.
35. Find the legendary giant teddy bear from the SatCom Array NN-03d.

36. Find as many cartons of cigarettes as you can. Enter Moriarty's Saloon in Megaton and drop the cartons one by one. When you're done, yell: "FREE CIGARETTES!"

37. [CHALLENGE] Find the prototype Tesla Cannon. Yes, it exists.
38. Find the heaviest item you can throw in the Rock-it Launcher.
39. Kill Fawkes at full health without using Stimpaks.

Fun things to do in Fallout 3, the last one:
40. [CHALLENGE] Jump off Tenpenny Tower and survive. Yes, it is possible.

Thant's all folks! 40 Things To Do in Fallout 3. I hope you have fun doing them and if you liked this article, share it with your Fallout friends. Safe travels, wanderer!

Tags: things to do in fallout 3, fallout 3